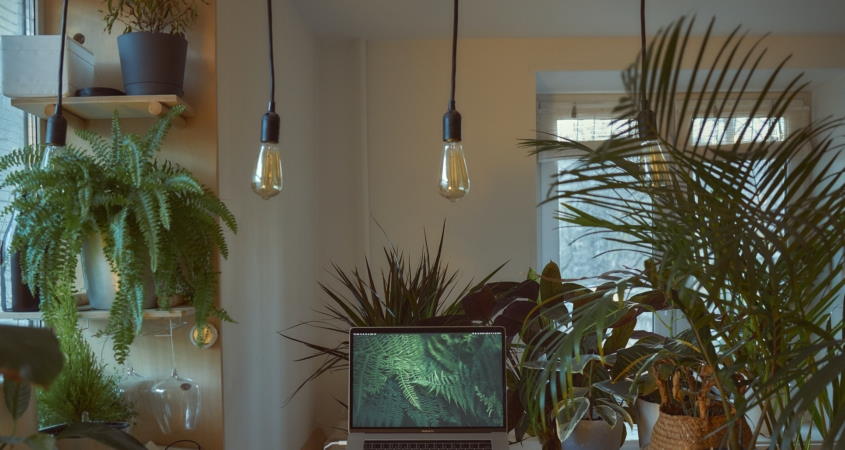 According to WHO (the organisation, not the magazine), the average person spends a third of their adult life at work. If your workspace consists of a screen surrounded by walls, carpet and a poster of your favourite footy team, maybe it’s time to add a touch of nature.

As practicing biophiliacs (yeah, you’re gonna have to google that) it makes sense to bring the green indoors. The connection humans feel to nature is more than just a want, it’s a need.

Indoor plants are as effective as healthy eating and physical activity in regulating the body. In fact, research shows that individuals who work alongside an office plant for a year are likely to decrease their fatigue, eye irrigation, dry skin and headaches by 28%. This positive impact on the body is partially due to the psychological value of being in view of nature. Plants positively alter our perceptions, ultimately leading us to feel and be healthier.

The Japanese were onto this way before the rest of us, practicing Shinrin-yoku – forest therapy or forest bathing. While forests at work could be a workplace health and safety issue (was that a brown snake?), indoor plants produce a similar calming effect. Adding any greenery to the workspace calms the mind, fosters creative thinking, innovation and imagination.

The new prescription for better health and mental wellbeing includes spending 120 minutes a week in nature and if you haven’t got an internal green space or roof garden (sticks poking out of your roof guttering doesn’t count), it’s enough to just have a view towards greenery.

Mental exhaustion is a productivity killer, which is why taking a mental minibreak several times a day can restore energy, vitality and attention. A 40 second micro-break spent looking out over your garden is shown to be far more restorative than eyeing your concrete driveway!

Thanks very much for your work. I’m very happy with the quality of the final product as well as your rapid turnaround time.

St Hilliers is very happy with the service provided by GO Creative. Our micro-website design was user friendly and the overall standard of work was excellent.

Overall very pleased with the outcome of the website. From start to finish, GO Creative was extremely helpful. Thankyou!

My business dealings with GO Creative have been nothing short of excellent. Their creativity with web pages and graphics has made my life so much easier. I have and will continue to recommend GO Creative to people I know who can use their services.

We have worked with GO Creative on several projects. Every time documentation was written well and any additional information necessary to complete project was provided. We definitely will be glad to work together with GO Creative in future and would recommend them as a partner for other web design and development agencies.

Grant and his team are wonderful to work with. Patient, understanding and quick to respond. I couldn’t recommend them highly enough!

GO Creative’s standard of work, value for money and communication on our SEO and PPC campaigns was excellent! Great service. Thanks.

GO Creative has been a great help to my business. Their staff are very capable and punctual and they offer excellent ideas in web design and marketing.

GO Creative will investigate exactly what it is you want to achieve; then use their creativity and expertise to deliver something that will blow you away, ensuring you are kept in the loop every step of the way. You will become a raving fan! Thank you for helping me achieve success with Global Innovations.

Really happy with all aspects of service received from GO Creative. A very professional business with fast lead times and overall great service.

GO Creative understood our needs well, and their communication and work standards were excellent. The redevelopment of our website was good value for money.

GO Creative has a talented team, with the ability to interpret an abstract brief and deliver concrete results. It’s always a pleasure to work with the GO Creative Team, after 2 years hiatus they came up in conversation today – we knew they’d break up our creative deadlock.

The standard of work and value for money was excellent! It was great that any requests for changes were dealt with promptly. I’d be happy to recommend your services.

It’s not happiness that makes us grateful; it’s gratitude that makes...
Scroll to top

This site uses cookies. By continuing to browse the site, you are agreeing to our use of cookies.

We may request cookies to be set on your device. We use cookies to let us know when you visit our websites, how you interact with us, to enrich your user experience, and to customize your relationship with our website.

Click on the different category headings to find out more. You can also change some of your preferences. Note that blocking some types of cookies may impact your experience on our websites and the services we are able to offer.

These cookies are strictly necessary to provide you with services available through our website and to use some of its features.

Because these cookies are strictly necessary to deliver the website, refuseing them will have impact how our site functions. You always can block or delete cookies by changing your browser settings and force blocking all cookies on this website. But this will always prompt you to accept/refuse cookies when revisiting our site.

We fully respect if you want to refuse cookies but to avoid asking you again and again kindly allow us to store a cookie for that. You are free to opt out any time or opt in for other cookies to get a better experience. If you refuse cookies we will remove all set cookies in our domain.

We provide you with a list of stored cookies on your computer in our domain so you can check what we stored. Due to security reasons we are not able to show or modify cookies from other domains. You can check these in your browser security settings.

These cookies collect information that is used either in aggregate form to help us understand how our website is being used or how effective our marketing campaigns are, or to help us customize our website and application for you in order to enhance your experience.

If you do not want that we track your visit to our site you can disable tracking in your browser here:

We also use different external services like Google Webfonts, Google Maps, and external Video providers. Since these providers may collect personal data like your IP address we allow you to block them here. Please be aware that this might heavily reduce the functionality and appearance of our site. Changes will take effect once you reload the page.

The following cookies are also needed - You can choose if you want to allow them: